Renovation work started on the monument in mid August 2016 with bids accepted and actual work starting in late August.  It is expected that the work will be completed by mid October 2016.

The monument restoration is nearly complete and will be all set for another 100 years. Thanks to Beth McFarlane from OHC who has been to Fort Recovery at least every other week to track progress and solve/answer questions. The drainage system is the object of repair at the moment. Lighting the monument was one of the original objectives but the money allocated from the Ohio budget may not be sufficient for the entire cost, so it could not be done. We are looking at the possibility of our museum budget "helping out" with that. It sure would be nice to get it ALL done while the renovation project is underway. And for years our local historical society has talked about the asset of "lighting" the monument. How beautiful would that be at night. And an honor for those soldiers who gave their lives!

Update from September 2016 Museum Newsletter:
Brian Brothers Painting and Restoration of Piqua was awarded $125,639 for the monument repair project which includes fixing cracks and replacing chips, fixing drainage issues and cleaning this beautiful memorial. The restoration also will fix the wear and tear issues from the freezing and thawing that have taken place over the last 103 years. Drainage problems will be addressed that may have caused some of the interior problems. Interestingly, the burial of the soldiers’ remains in a crypt in the base of the monument caused some early-on issues. Special equipment, including radar, had to be used to certify the exact location of the remains before drilling and drainage issues could be addressed. Imagine that! After 225 years, the effects of that battle still impact our actions! Thanks to Beth McFarlane of OHC for overseeing the decision-making and doing the on-site observations. Mid October is the target finish date! In the meantime, visitors can still enjoy its beauty and significance. 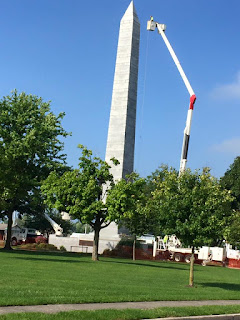 The monument was inspected in October 2015 with a 105 foot boom and an internal camera in preparation for renovation. The extensive investigation resulted in more work than initially expected and the renovation has been postponed to 2016 after the Quasquibicentennial Celebration. The Ohio History Connection has set aside $125,000 in capital improvement funds for this project. Read more about it in this Daily Standard article from February 27, 2015.

For photos of the original monument construction, see this Photo Collection and Comments from James Wagner.

Posted by Fort Recovery State Museum at 6:39 AM