Author and Attorney, John Winkler will be the featured speaker at the Fort Recovery State Museum at 3:00 on Sunday, August 27. His presentation will be the topic of his latest book, The Thames 1813: The War of 1812 on the Northwest Frontier.

The Kentuckians wanted to end the threat of the British inciting the Native Americans’ attacks on the settlers between the Ohio River and the Great Lakes! These troops that fought at the Thames were led by William Henry Harrison. Known in Canada as the Battle of Moraviantown, it is perhaps best known as the battle where Tecumseh was killed.

This is the fifth time John Winkler has spoken at the museum, and attendees report each time what a fascinating speaker he is. The presentation is sponsored by the Fort Recovery Foundation and the Patrons of the Museum, so there is no admission cost for this event which will be held in the Community Room of the Fort Recovery State Museum, 1 Fort Site Street. Winkler’s Campaign West series of books are available at the museum, and the author will gladly sign them.

Join us for our One of A Kind Auction, sponsored by Fort Recovery Historical Society and Project Recovery. This truly is a One of a Kind event! There will be a variety of items up for bid with a Silent Auction, Live Auction, and Raffles throughout the evening. Enjoy delicious Hor d'oeuvres homecooked by Psi Iota Xi. Come to bid or just enjoy having a night out with many from Fort Recovery and surrounding communities! 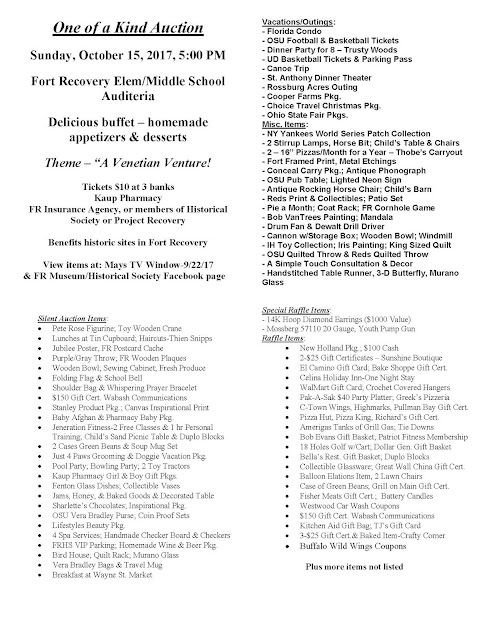 Posted by Fort Recovery State Museum at 6:36 PM No comments: